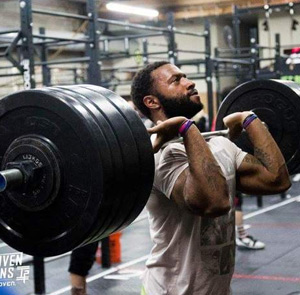 Ashley “AJ” Jordan played high school football at John Hope High School (Coach Burns was his Head Coach) in Chicago before getting a full scholarship to play collegiately at Missouri S&T University, where he received a degree in psychology. His first intro to CrossFit was  “Fran,” the well-known CrossFit benchmark workout. Doing the workout with Coach Burns after a practice (AJ had since returned to his HS alma mater as an assistant football coach) pushed him to new limits. It was then that AJ knew he was going to love CrossFit.

Jordan has coached CrossFit at Bronzeville CrossFit from its inception and is dedicated to making it to the CrossFit Games one day (with his girlfriend, Kelly O’Brien, by his side).

An inspiration to all  AJ has overcome  Hodgkin’s Lymphoma his last year of college. His his extended football family as well as his fraternity brothers (Omega Psi Phi) supported him as he went through treatment. Using this experience as a springboard, AJ knows every obstacle can be overcome, both in the gym and in life.